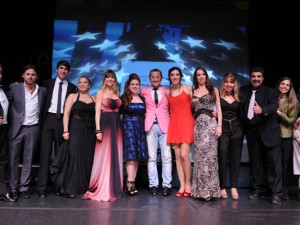 The stage of Conrad Punta del Este Resort & Casino is preparing to welcome the 12 finalists of the contest “Conrad looks for his star” in the grand gala on Friday October 19 at 21:00 between the maximum winner who will be awarded a contract performance in the most exclusive entertainment center in Latin America.

Broadcast live on Channel Eleven of Punta del Este, is an extraordinary sight on a tour of different genres and authors in a bid to Conrad to discover and promote talented Uruguayan hundred percent.

The 12 finalists will compete for the top three of which only one will be awarded a contract action in Conrad. Difficult task for the jury of the actress Victoria Onetto Argentina, Uruguayan Alvaro Navia actor and musician Raul Medina.

The road to the final gala
Of the 100 enrolled from various parts of the country and with an average age of 28 years, were selected 24 that showed their artistic talents in the two previous galas. Treated the same way as the big stars who have passed through the stage of Conrad, participants were prepared in the dressing rooms of the theater next to Copacabana Hotel entertainment staff to refine details of sound and lighting, and were attended by a team of makeup artists and hairdressers.

No doubt it will be another evening full of excellent performances and humor by famous actors of the jury and the unique pairing of Karina Valverde Vignola and Gaspar, drivers spectacles.

INVITATION
We invite the public to enjoy the gala final contest and encourage their favorite candidate on Friday October 19 at 21:00. Free and open access, the invitations for the event may be withdrawn from Thursday 17 at Casino Promotions Center.