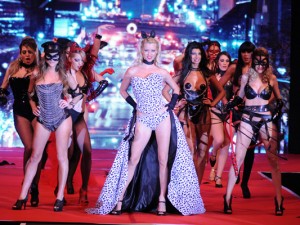 Conrad Punta del Este Resort & Casino was the scene of the most sensual winter parade attended by the stunning Victoria Saravia, Nicole Neumann, Michelle and Solange Breque Abraham in HOT PARTY held in the ballroom of the resort.

Preferred Customer Exclusive casino, consisted of a parade in which the famous models deployed playfulness, joy and a big dose of sexiness while twenty-four and sixty dancers on stage an elaborate costume past several choreographic paintings were the ingredients for explosives unique evening in the Hot Festival 2012 from Conrad.

The style of Hollywood parties, guests were greeted in the hall by beautiful girls on stilts, nice cigar and two exotic Thai in robes of gold and silver.

A voluptuous pin-up girl (model almanac) surprised everyone by appearing in the audience and began a spectacular show which combined elements of burlesque cabaret and circus to the sound of the chords of electro-tango bandoneon played by a live .

The walkway in the middle of the room was taken by a group of jugglers, acrobats and harlequins with colorful costumes. Next, can can dancers were part of the initial pass with Nicole Neumann parade dressed as a Renoir painting. With parasol and wearing crimson shared the catwalk with Victoria Saravia and Solange Abraham, the exuberant playmate, followed by Micaela Breque who revealed naivety and seduction between pink and feathers fuccia.