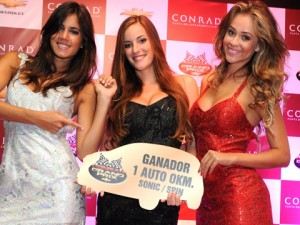 Conrad had already three winners, two Argentines and a Brazilian, who have won four vehicles from Sunday January 6. The next Saturday, January 19, Conrad awaits the winner of the fifth Chevrolet.

“Conrad Grand Prix”
At 01:00 on Wednesdays and Sundays in January and February is held the draw for cars 0 kilometer between clients holders of Conrad Rewards Card that generate coupons for each date draws playing slots or tables.

To the 15 cars to be delivered this summer awards they added up to USD 20,000 in non negotiable chips waiting to be played at the Conrad Casino.

Increase the chances of luck with the draw of “Grand prix bonus” on Tuesdays and Thursdays at 01:00 to win one of the cars or even $ 10,000 in non-negotiable chips.