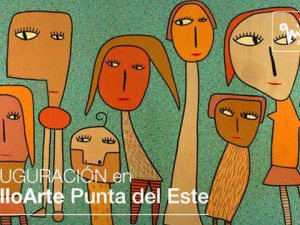 As for already several years, GrilloArte opens the summer season in Punta del Este outstanding artistic offerings, in what promises to be one of the more attractive events in the Uruguayan city. The gallery, which has more than 500 square meters of exhibition and is located in the heart of the peninsula, will present the works of three protagonists of the contemporary cultural scene.

Those in Punta between December 28 and January 11 will enjoy the work of talented Milo Lockett, undisputed figure of plastic art, internationally recognized, exhibiting its innovative pieces and colorful production. The opening will be on 28 December at 20.30hs.

As pre opening of this important proposal on 27 December at 21h, Lockett will be giving a talk and painting live in the gallery.

Meanwhile, from 20 January until 4 February, will showcase the work of Eduardo Mendoza Hoffmann, world renowned painter, who has presented his works in major international art fairs, exhibits for the first time in gallery.

Finally, between 4 and February 15 will present the work of Felipe Gimenez, psychologist turned artist, owner of a clear perception and powerful, as his pieces. Over the past eight years GrilloArte GrilloArte is the largest art space in the peninsula of Punta del Este. Located in the center where the most exclusive shops, is a meeting point and maintains a constant flow of visitors throughout the season.

The gallery is home to over 50 artists and internationally renowned. GrilloArte is a modern exhibition center, has eight rooms for simultaneous solo exhibitions, sculpture courtyards, large back room, and audio-visual room. GrilloArte has become imperative Cultural Tour in Punta del Este and is a reference for collectors, decorators, art dealers and art lovers.