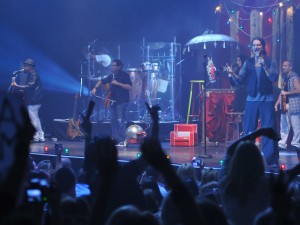 To the delight of the audience, mostly female, the troubadour Guatemalan provided a two-hour show in which they interacted at all times with their fans. The generous code is not left out any of his biggest hits: Taxi, There is love, Come with me to be alone, Love, My Bride, Without you without me, Naked, Tell me not, When, I, I hurt, Lady, Reconciliation, if the North, The problem, I know, Penguins in bed, no damage, Minutes, Women.

The deployment of scenery which simulated a circus atmosphere, light and sound work involved 70 people between owners of the stage, Mexican technicians, musicians and production staff.

Ricardo Arjona arrived Thursday at 07:30 to Punta del Este by private plane from Guatemala, accompanied by his son Richard, an assistant, a tour manager and two guards. Hosted in a 14th floor presidential suite, the artist rested and then did soundcheck. Before the show requested dinner in their room picaña, steamed vegetables and chicken legs with potatoes.

For the clubhouse called a blender to make a powerful mix of ginger, black sugar, honey, lemon and eggs to drink before going on stage.

The busy schedule these days included shows in his native country last weekend filming a documentary on Monday, day off on Tuesday, 10-hour journey by private jet to Punta del Este and recital at Conrad. He enjoyed boating on the harbor, La Barra and springs and even made time for a game of paddle with members of his staff. He left here Saturday from Laguna del Sauce airport to Cordoba where he will continue the tour.