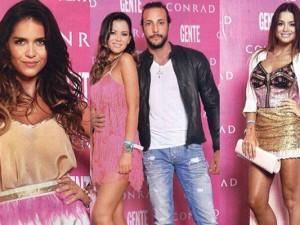 Under the strict dress Code Pink Touch and over two thousand guests, was held in the gardens exclusive Conrad Resort & Casino which is known in Punta del Este as “the most anticipated summer party stenosis”

The unforgettable moment of the festival is the classic parade. Under the theme “Circus” paraded 50 models, including Debora Bello, Lara Bernasconi and Karina Jelinek, responsible for closing the block Domadoras and hunters.

Christian Castro was responsible for the spectacular show in which he sang all his hits by raving to all girls in the audience.

The party came to an end with fireworks and Vilma Palma, banda emblem of the nineties, which featured a show more than fun and everyone danced.